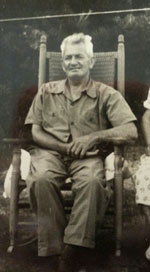 I remember the scent of beer was light on his breath, like stale crackers, and his whiskers scratched against my skin.  He didn’t have teeth, and each day as we left him I feared so much getting a kiss from that mutant hole that my body turned to stone with his touch.
We came to Happiness House once a year back then.  It was a time of wonder and exploration for me and I hoarded it for some boundless and future greatness that was to be mine.  Nobody understood my world, especially not him.  And when I saw the tear that slipped from his one good eye, upon seeing us for the first time in a year, I told myself God had paralyzed his one side as punishment for having had a bad temper when he was young.
He was my grandfather, but I did not care.  He couldn’t walk.  He couldn’t speak but a few words from his half-frozen mouth. And his sounds were so badly-formed that I lost all patience sitting there, waiting for something that made sense, watching his neck crane and his eyes dribble from sheer helplessness.  While others stayed inside, I went out into the garden and photographed the cats with my little Brownie box. I clicked madly, capturing aloofness at its finest hour, leaving the world of relatives and dutiful respect behind. Cats were sublime  creatures. Cats understood how, in a pinch, it was best to be cool and walk away.  I was a cat.

Sometimes we would go to the beach. He’d sit by the rocks on a lawn chair and watch us as we shrunk to mere specks against the blue horizon.  Beads of sweat would break and run down his forehead, and he would wipe his brow with a faded white handkerchief.  He wouldn’t wear a hat.  Often he would beckon me with his cane as I returned to the blankets to dry.  I’d shake my head and run off, tossing rocks into the sea foam, picking up handfuls of sand to fling at the endless spread of blue.  Then I’d venture too close to him — sometimes on purpose — and he’d hook me, his one good arm pulling me in like a fish on a line.  “No, no,” I’d laugh, breaking free from his hook and leaping backwards.  And the cane would come crashing down in the sand repeatedly as he expressed his disapproval in the only way that he knew possible.
That cane was his staff of life, the voice of all the pain and passion trapped inside.  That smooth, hard wood never failed him.  Afterwards, he always smiled.
“You’re so mean to him, dear,” Mom would say. “Why?  You’re all he has in the world, you know.”
* * *
Basta! Basta!  Cattiva!
She watches him in the sunshine as waves his cane with his arm and screams at her.  She has gone into the garden, to the rows of red balls.  Apples.  She has picked one.  Why does he scream at her?   She has bites the red ball, the pretty apple.  But it is bad.  She drops it in the dirt.  She picks another, bites it, and drops it. And another.  Grampa has bad apples.
Non mangiare i miei pomodori — Basta!
Oh!  He shakes his cane at her. Now, her shoes are wet.  She runs away, fast, looking for a place to hide.  Looking for Mommy.
* * * 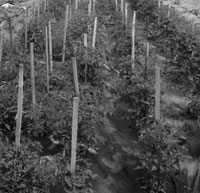 Matteo had been a grounds gardener, tending a rich architect’s estate.  After the stroke he could no longer work, so he began his own garden in the back yard of our three-generation-strong home.
He would spend hours pruning the stalks, tying the plants to their stakes with his one good hand and his teeth, making sure each tomato got just enough sun to ripen to its fullest flavor.  He’d measure the beans before he picked them.  He’d squash the earwigs with his good thumb, ferry the ladybugs from leaf to leaf to spread their luck, and make tunnels with his fingers for the earth worms.  At the end of each day, he’d move through the rows of tomato plants methodically with his cane, inspecting the work he’d performed, shooing away the cats who ventured too close to his babies.
When my brother was born, he planted a pear tree in the very back of the yard; when I was born, he planted a cherry tree beside it.  After my Dad’s death forced my Mom to put Matteo in a nursing home and move west to her sister, the new tenants cleared everything to install a swimming pool.  None of us ever told Matteo that.
* * *
She is a Big Girl, now.  She can go off into every room in the house by herself.  Today, she has snuck into Grampa’s room, to see It.  It.  That big old glass jar that sits on the floor next to the quiet double bed.  Sometimes in the night she hears someone slip from under the covers, and a cold plunk plunk of feet on the floor.  She knows he stops in front of It.  And she hears the sound of a warm wet stream shooting through the open mouth of the jar.  Grampa can’t walk to the bathroom.  Ick. Grampa makes peep in a jar.
* * *
One summer, when we could not make the annual trip out East, he came to our house. 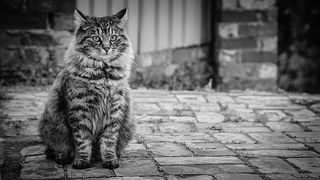 When he was wheeled off the plane by a skycap, I made that obligatory kiss with more forbearance than in previous summers; I was older, and growing up.  Still, I lingered behind.  While my brother held the arm of the wheelchair, while Mom and my aunt pushed, I dawdled in the rear, looking at newspaper headlines, wondering if I could still go to the playground while Grandpa was in town.
Around the house, I was a sleuth. Coming downstairs once, I was forewarned by the clump of the cane’s rubber tip, the dragging of the lame foot moving snail-like through the hallway.  I snuck back up the stairs until he’d passed, avoiding any possible meeting of our eyes.
I did not realize that, when he looked at his grandchildren, he saw in our faces his only child, whom he had tragically outlived.  I only knew that I could not go near his pain. Behind those pale blue eyes was a blubbering, bewildered anguish that mimicked my own childlike understanding of things. And I dared not look deeper.
When I got older, we cut our visits down to every two years.  Perhaps my brother and I complained too much about making the trip.  Or perhaps we all wanted to pretend Matteo was not there, to forget that the game of life is sometimes unjustly played.  On a winter evening in January I lay on my bed reading.  In the other room, my mother picked up the phone, and the surprise in her voice signaled long distance.
“Yes,” she said solemnly, and then the “oh”—half-word, half-sigh— broke my concentration.  My body tensed.  Blood pulsed in my temples.  My ears perked up, listened for the pauses and filled in the words.  It was a cousin.  She was telling Mom about Grandpa.  My skin turned to ice. I chiseled out a smug expression, composing myself.  I looked down at the pages of the book and read the same line over and over, then the same word.
“No, no, I don’t think we can make it.  The weather… We have snow here, and we’re busy with work.  Besides, Michael’s had the flu…
“Well, it was probably for the best,” she added.  That last word dropped like a brick through her air of gentility.
She came straight into my room.  “Grandpa — died last night,” she said.  “He was complaining of pains, and they took him to a hospital, and his heart…”
I sat still on the bed, staring at the same open page, curling its corner with my finger.
“I thought that was it,” I said, cool, in a pinch.  “Are we driving out?”
“No,” she replied. “We’d never make it.  He’s being buried day after tomorrow.”   Besides, I could hear her thinking, if we weren’t able to make it when he was alive, why go when he’s dead?
After she’d gone, I tried to read.  But the words were like racks where nothing hung.
* * * 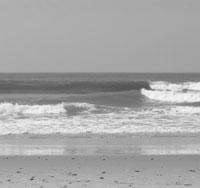 It is a warm spring evening, and the girl lies in bed, unable to sleep.  She feels confusion – as adolescents do in the middle of the night – and an itchy restless sadness she doesn’t quite understand.  Her thoughts are of Matteo and of summer, which would come this year and pass without the trip to Happiness House.  There would be no visit to the ocean.  And she would never again feel the round smoothness of his cane, hooking her leg as she hopped past just out of arm’s reach; or the sick spot she’d learned so well in her growing-up process to hide when he reeled her in for a kiss.
She gets up, turns on a light and rummages under her bed for an old box.  From it she pulls out her collection of cat pictures from four summers ago, when she was nine. She arranges them all together on the dresser, each one so poised, so chilly in its artistry.  She stares at the creatures she didn’t know, yet languished with on those summer days out East.  Her brood.  Her barrier.
She shivers as she pictures him sitting outside in a deep-seated wooden lawn chair, breaking into a smile when they drive up for the first time in a year, and waving his cane.  And threatening to poke them with it when they sass him.  And reaching out for them with the love that he had, in the only way he could, during a moment of sweetness she could not stomach.  Now, her stomach hangs empty, cold, and her heart reaches out to her surroundings, like a cane trying to hook something warm.
And just beyond her reach, a large body of love, unexpressed, slides through the hook, escaping, giggling all the way to the water’s edge.