(my new obsession with Formicidae) 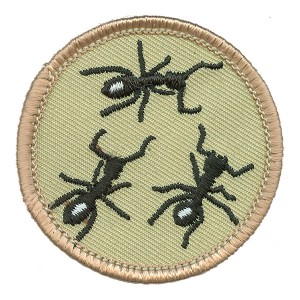 It’s 2 a.m. and there’s an ant crawling along the edge of my laptop screen. My pointer finger flings it off of my bed and onto the floor and I resume streaming Catastrophe in the dark. I don’t turn on the light because, well, honestly, I don’t want to find anymore ants.

I’ve been on ant patrol since we helped move into the daughter’s new house a few weeks ago. It’s that time of year and we’re in that part of the city that intersects with the Santa Fe ant trail. As I pass the small field on my way to Starbucks, I see two anthills, roughly the appearance and size of a wheelbarrow filled with sand, then dumped in a haphazard pile. Yet they have actually been carefully constructed by the most populous insect species on the planet. So when I think of the house battle of us vs. them – us being a few and them being thousands, I get anxious.

When we first moved in, they pretty much owned the place. Ants sauntered across the kitchen counters. Got water from the sink. Explored the cupboards. Looked conspicuous in the tub. I laid down boric acid and sugar and some pretty strong baits, and within a couple of days these laissez-faire ant groups were gone. What followed was just willy-nilly ants. No great clusters but bold scouters crossing the brick floor alone, or crawling up the bathroom wall, or randomly tackling the lonesome journey across the ceiling. And I can’t focus as long as there’s even one inside.

There’s an ant crawling on the tracks of his wooden train set. He puts Thomas the Tank down, watches it for a few seconds, and then ends its life with his tiny finger. We do this a few times a day. And they show up in just about every place imaginable. This morning when I went to get him up, there was an ant on his pajamas. Just one. But that’s the thing. You never know whether that one ant has crawled into the coffee you’re drinking, drowned, and perhaps sunk to the bottom.

Each day, I bait half-dozen traps with fresh Terra. It’s the best stuff. A few drops of the sappy liquid can send ants into a sugar frenzy, as they call out to their brothers to follow their pheromones to the food source and ferry it back to the nest. Terra’s the best for do-it-yourself anting, but the truth is sometimes you need a professional.

We’re not at that point yet, as I am studying the travel patterns of the scout ants. I still wear my anxiety each time I see one. How can we prevail over a species that’s been here eons longer than us, and whose social behavior, like ours, is complex?

I recall an afternoon in 1982 on the island of Nusa Penida, six miles off of Bali, Indonesia. I’d gone there for a few days to ‘exile’ myself because my Hindu travel companion, a.k.a. the boyfriend, wasn’t permitted to touch women during their monthlies. The island was remote and somewhat primitive—my pension had one toilet for everyone and one outdoor shower. If you were really hungry, the owners would kill you a chicken. But mostly, for protein, we ate omelets.
I became thick with an Australian schoolteacher–another female traveling alone–and we tooled around together for the week. On my last day on the island, I sat with her as she ate her breakfast – toast, omelet, tea – and watched silently as she swallowed her eggs unaware that there were several ants visibly cooked right into the underside. I said nothing, of course. Why ruin her meal?

Now, as I notice an ant floating in my just-brewed cup of Rishi White Jasmine tea, I think twice. But this isn’t Nusa Penida; I pour it down the sink.

Living with a few ants, well, it’s not so bad. In this small southwestern-style house with its brick and tile floors, surrounded outside by sandy dirt and dry shrubs, well what would you expect, right? I zero in on those few areas where ants have ‘taken’ to Terra, and I bombard them with sweet poison. That should do it. To keep ants off the grandson’s bed, I have wound double-sided tape around all four bed legs. Stopped in their tracks!

As for the kitchen, I routinely spray the counters with a vinegar solution; for three weeks it was very effective. Then on Saturday while I was at a seminar, the daughter texted this: 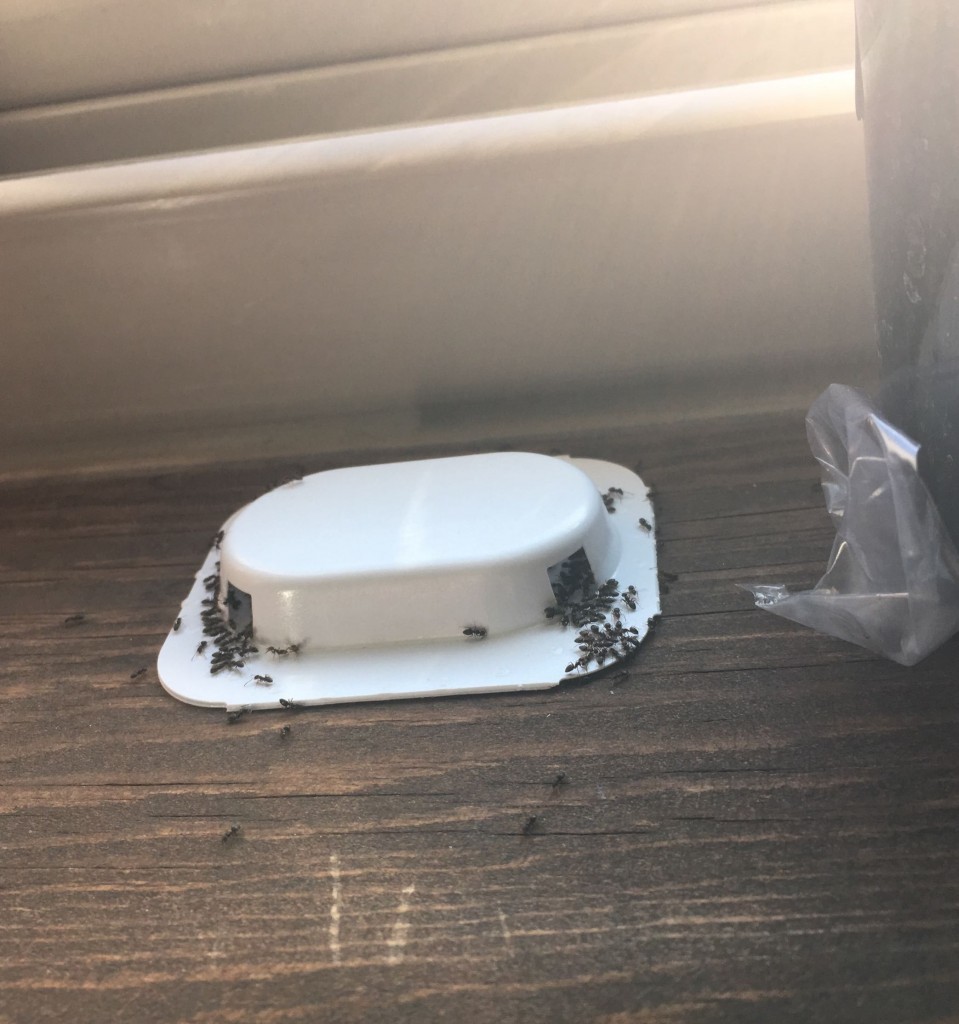 An ant bait that had been sitting dormant on the sill for a few days suddenly attracted a swarm coming from under the window sill. See, this is how it works. You kill off one generation, and a couple weeks later the second generation, those in larvae stage during the first kill, are hatched. Again, time to kill. In this second wave, I’ll wipe out this colony living somewhere in the wall behind the sink and seal the cracks in the kitchen floors and windows with silicone caulking. I’ll do the same in the bathroom, hallway, and grandson’s room. But first, we’ll have to deal with a few days of delirious, dying ants wandering aimlessly around the kitchen floor and walls. This, too, shall pass.

What I’ve Learned from Ants

For the last week, whenever my daughter sees me open my mouth, she rolls her eyes.
“Are you going to talk about ants again?” she says wearily.
Well, yes, actually. I’ve become obsessed with these sugar ants – how they move, where they live, why scouts continually re-appear looking for food sources when we are meticulous about keeping the place clean. I’ve blown diatomaceous earth into the cracks under our radiators and around the edges of our laundry closet. I’ve swept up dried-up ants by the score, and am getting ready to seal the hallway and bathroom soon. I’ve marked with green tape each and every spot where I’ve seen them come in or go out, and I’ve spent probably too much time following the travel patterns of the live ones I still encounter.
“You’re kind of crazy you know,” my daughter says. “Watching ants.”
Perhaps.
But while searching the internet to find out why scout ants walk up walls, I discovered my ant-interest is not that unusual. Nobel physicist Richard Feynman was obsessed with ants, and he researched them compulsively after finding them in his Princeton dorm room. He wrote about their behavior:
“One question that I wondered about was why the ant trails look so straight and nice. The ants look as if they know what they’re doing, as if they have a good sense of geometry. Yet the experiments that I did to try to demonstrate their sense of geometry didn’t work. Many years later, when I was at Caltech … some ants came out around the bathtub… I put some sugar on the other end of the bathtub… The moment the ant found the sugar, I picked up a colored pencil  … and behind where the ant went I drew a line so I could tell where his trail was.
When the next ant to find the sugar began to go back, I marked his trail with another color… he followed the first ant’s return trail back, rather than his own incoming trail. This second ant was in a great hurry and followed, pretty much, the original trail. But because he was going so fast he would go straight out, as if he were coasting, when the trail was wiggly. Often, as the ant was “coasting,” he would find the trail again. Already it was apparent that the second ant’s return was slightly straighter. With successive ants the same “improvement” of the trail by hurriedly and carelessly “following” it occurred. I followed eight or ten ants with my pencil until their trails became a neat line right along the bathtub.”

I am not following ants with colored pencils. https://makezine.com/2008/02/29/feynman-and-ants/

Two days ago I sealed the cracks in the bathroom, hallway, and kitchen. Yesterday, nary an ant showed itself in the bathroom nor in the kitchen.
But today there was one on the bathroom tiles and two on the hallway floor—this is at a time when I happened to be checking. My head explodes when I imagine how many there actually might be in the WHOLE DAY. Then my adrenaline puts me on perpetual edge, I’m an ant junky, eyes scanning each tile and every room corner, thoughts swarming with their infinite numbers, I liken them to corpses in Night of the Living Dead (the original) as they move first in lines, then columns, and then as lone, driven, crazy outliers getting through the smallest sealed-up spaces. Like those reconstituted bodies, you can’t get rid of ants, they can die but there’ll be another coming up the rear.

The hairdresser next door gives us the name of his Orkin man. With the daughter’s two dogs, this is not an indoor option, but an outdoor treatment, perhaps? Controlling them in the rooms, however, will remain an ‘inside job’. It has become a daily regimen; bait 6 stations, spray down counters, spend 30 minutes studying ant paths, wash off the grandson’s finger ….

Sometimes, you can’t get something out of your hair. You might block it out completely for a short while, but it finds its way back in. Ants are a bad metaphor for every gnawing thing that clutters my head—that goal I haven’t accomplished, that incident I re-enact repeatedly in my mind, that person I want to stop caring about but can’t. Life isn’t perfect; neither is a house. Updated appliances, sure. Renovated brick flooring, retiled bath, upscale light fixtures and hardware, okay. Andersen windows, new roof and deck, fresh plaster and paint, and a swank accent oak beam crossing the high ceiling? Impressive. But beneath those floors and just beyond those walls lies some fundamental DNA.

And so I rebait, reseal, and deal myself in.

This entry was posted in Loose Chunks of Debris, retirement101 and tagged ant, Santa Fe. Bookmark the permalink.