My mother was an anonymous artist.  Beginning when I was in grade school, school, mom got a part-time seasonal job as a hand-colorist of black and white portrait photographs. Most of her work consisted of high school graduation photographs—which she hand-colored with oils on a warm-toned print. Occasionally, she’d get a studio portrait in which she’d paint a background of something that wasn’t there – trees, grass, fence, flowers on a table. There were also the occasional portraits of soldiers in their uniforms, either going to, or having returned from, Vietnam. 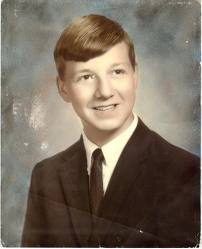 I remember coming home from school each day and finding seven or eight portraits drying in our front porch amidst a waft of turpentine—an hour spent on each one, sometimes more, the eyes lit up with points of Marshall’s white paint, a streak of highlight worked into a golden blonde flip, a pinkish flush on an upper cheek. Like life itself, the surface directions were often simple: skin pale; blue eyes/black jacket; or skin: suntan; brown eyes/green sweater, skin pink: green eyes, gold

locket. And so on. The flesh tones were all done with varying degrees of burnt sienna; the background was usually a standard grey, with accented light around the head. It created an ethereal presence, drawing the eye into the portrait. It also balanced the composition with movement and contrast.

But like life, getting the nuance was not always easy. Sometimes there was a strand of hair too thick to retouch on the negative, or some crooked teeth. The paintbrush thus became a wand, widening eyes, streamlining noses, taming wild hairs, straightening a curled lip.

By the early 1970s, there wasn’t much call for her kind of work anymore, as most graduation studios were switching to color photography, so she turned to painting copies of famous paintings, or arranging a still life and trying her hand at it.

In all, mom must have painted more than 2000 graduation portraits, among others. I think about those graduation photos, made from the early sixties on, which are probably still hanging, framed, in people’s homes. Anonymously colored. By mom.