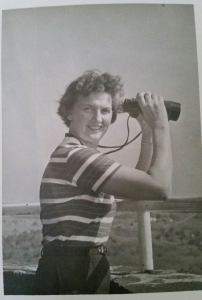 A saying that was part of my mom’s childhood, and a mantra of its time, was: Keep Calm and Carry On. It was a motivational poster produced by the British government in 1939, several months before the beginning of the Second World War, to help lift people’s morale during a trying and dismal time.
At age 21, mom left her home country to come and live with a new American husband and his Italian immigrant family, half of whom didn’t speak English.
That’s pretty brave.
Mom had some hard knocks. I like to think that by the time she started losing to dementia she just shrugged at the struggle, ‘ been there, done that’ and carried on. I like to think it helped her get through the transition from life to death as well–on May 22, 2014, a year ago today–because she did keep calm and she did get on with it.
Here are a 5 things she’d say that I will eternally associate with her, and that I am thinking of on the anniversary of her death:
1. Can I get a doggy bag?
2.  Let’s see if we can find it at the Goodwill.
3.  Joel, you’re going too fast.
4.  Janet, I’m older and wiser than you.
5.  Put your shoes on, Lucy, don’t you know you’re in the city?