$80,000 a year. That’s the cost of good assisted living memory care in and around NYC. Today, after a tour of a facility in New Jersey, I came to realize that, although I’ve recently entertained moving mom closer to me, her finances won’t bear it. 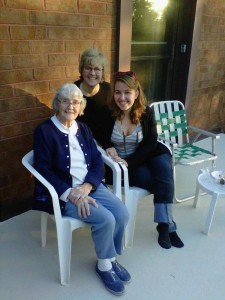 So, I’ve decided to leave mom in the midwest, where it is cheaper, where her money will last longer, maybe three years instead of two. Which means we will see each other three times a year, most likely, for the remaining years she is alive.

The length of our nightly phone conversations is already beginning to wane, as she has more trouble knowing who’s on the other end of the line, as she increasingly has nothing much to say, as what conversation there is is reduced evermore to repetition and rote. She writes down my name, my phone number, what time I called. If I call half hour later, she verifies the information.

I fantacize giving up my job, apartment, male friend, mortgage, and moving back to the midwest to take care of her, but this is foolish, financial suicide.  I’ve been a thousand miles away for 34 years—what selfish impulse inspires dreams of ‘going home’?

It’s that invisible umbilical thread reminding us we carry one another inside ourselves into the future, infinitely connected. Because that is the Ticket. Really, not too much else matters.