Grrrr, anger. It makes you lucid. Mom sits on the couch drifting downriver in her head, appearing oblivious to the streaming conversation taking place between me and her friend R. It is midwest Labor Day scorching, so I get up and turn on the fan, and then suddenly, snap!
Mom jumps up and turns it off: Since this is My house, it is rude of you to touch my things without asking. You’ve taken my car away already, now you feel you have run of things here? Turning on a fan without asking whether others mind? What’s next? Take all my money?
But it’s hot, I explain, and I am here to help. Go back where you came from and leave me the hell alone, I’m doing fine on my own, I don’t need anyone’s help. She gets up and recedes into the kitchenette; I think I hear her mutter ‘f’ing b*tch.’ And I realize, in her eyes, I’ve morphed into Evil Child.
Since I saw her six weeks ago, she has lost eight pounds. At barely five feet one, she is already petite, but weeks of erratic home care have messed with her diet, which has become mostly black tea with milk, sandwich meat, bread, marmalade and bananas. 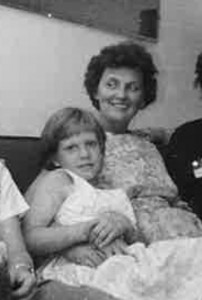 Her purses, all three of them, contain tiny baggies of chocolate-covered candies and wadded paper towels, and a couple of half-eaten McDonalds cheeseburgers. The money, the wallet, the i.d’s, are long gone . . . my sister and I agreed to take the important stuff away when I last visited in July. My mission, this trip, is to find her some kind of 24-hour care. In the short run, we might have to settle for an 8-hour day of home assist, but the 24/7 is imminent—either through a facility or a live-in. Last night, sitting out on the balcony, I explained this to her, and she told me that she still needs to have “time to myself” or she’d be very unhappy. I ponder this. It, too, is a very lucid observation, and she addresses a fundamental human need. What a hard transition this must be for her. In this lucid moment, I recognize the mommy from childhood: polite, sharp, solicitous yet slightly suspicious, beautifully lithe, and unexpectedly compassionate. She once took me on a mad-dash to try and glimpse the Beatles’ leaving our city from their hotel room, after noticing me crying while I listened to “Things We Said Today” on my record player. While it is possible she did it out of guilt (since she could not take me to the concert the day before), I like to think it’s because she recognized the rite of a girl’s first fantasy love, and maybe she remembered having her own.
We never did see the Beatles; the crush of girls surrounding the hotel was too deep. But we did share an adventure, and create a memory.