This Is Not Us 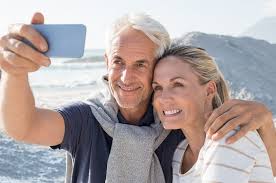 When I see Cialis commercials or Celebrex ads, or other doses of retirement-is-carefree dopamine, to me the couples look like they are about 49 or 50 and have just been given silver hair for the commercial shoot.

The images in articles and on retirement blogs are similar. We’re not old, we’re ‘the youth of old age.’

That’s not my partner and me. We’re honest-grey, slightly-cubby folks who like to eat too much home-cooked food, drink too much wine, and nap in that order. Our idiosyncracies have seemed to magnify with the years. We hang out with our laptops doing nothing much of the time (i.e., by that I mean watch Netflix, do Sudoku, read blogs, tackle an easy e-book). We also occasionally (no, make that frequently) ponder our own mortality. Lately we’ve been looking at photos of our younger selves and even ourselves as children, imagining we are still that girl/boy/adolescent/young adult that we once were…

We both managed to work steady jobs for long stretches of time (20 years at one company for me, 22 for him), so we have some retirement (i.e. unemployed) income in place, and hope to struggle successfully when we pool expenses. Although pensions are very much a thing of the past, my partner has one from his time in a union. (Pensions, my friends, are game changers.)

However, nowadays many members of our Baby Boom generation don’t have income security, and how long ours will last is an open question. A recent article in The Atlantic makes clear there’s a crisis in this country for persons retiring during the next decade. In fact, this statistic floored me:

“Older Americans were the only demographic for whom poverty rates increased in a statistically significant way between 2015 and 2016, according to Census Bureau data.  While poverty fell among people 18 and under and people 18 to 64 between 2015 and 2016, it rose to 14.5 percent for people over 65, according to the Census Bureau’s Supplemental Poverty Measure, which is considered a more accurate measure of poverty because it takes into account health-care costs and other big expenses.”

What’s more, income insecurity disproportionately affects women. Women are the ones who take time off from working (foregoing building up our Social Security retirement fund) to be caregivers, or to have and then raise children, or to take on a myriad of other family tasks–not to mention that women still work for less money. 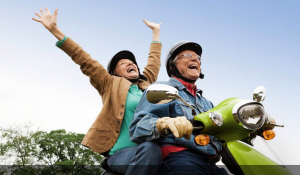 So, when I see images with carefree happy retirees, such as this one here of boomers riding their scooter, I have pause. I’m concerned not only for my generation, but for future generations that are just entering the savings market now, and for where they’ll be in 15, 20, 30 or 40 years. And concerned especially for women, who still face inequality when it comes to job pay.

This entry was posted in Loose Chunks of Debris, retirement101 and tagged baby boomer, Cialis, retirement. Bookmark the permalink.