Calling mom can feel like walking barefoot on a morning’s first cold snow. Silent, deliberate, a hint of the treacherous afoot, and then, with each ring the ache of brain freeze rushes in. Monday, Tuesday. Wednesday, Thursday . . . four days have passed since we’ve spoken. I’ve called each evening but reached no one. I know she is home . . . but she must be ever more disinterested in communicating. 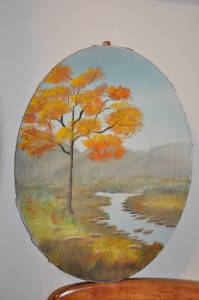 Or, maybe she just can’t figure out how to pick up the phone.

N says that she’s put tape over the light mechanism in the refrigerator, to stop it from popping out so the light comes on when the door is opened. That’s ma, saving on electricity. Growing up in wartime England as she did, she’s been thrifty all her life. All those pilfered packs of restaurant sugar!

I have called during the day (when the home aide is there), but she is into the habit of just handing the phone to the aide after thanking me for calling. That’s why I call at night when they are gone. Hoping to find her . . . force her to be present in their absence.

Maybe the beauty of Dementia is that it gets a person ready for death. For, the illness continues to separate her emotionally from my sister, from me, from the memory of my dead brother. And see how her attachment to her own paintings is diminished? How unconcerned she is whether she wears the same shirt for the third day in a row? Life is Rote recollection. Reaction. Ambiguous awareness, routines pared down to a pace.

Here’s an oval still life mom painted. If I were her, and if this was the Twilight Zone, I’d just jump right into this picture and stay forever.  Hell, it’s pretty in there.