I stuck mom’s Aracept in a small dish of cut canned peaches last night, and she didn’t notice. Tonight, it went into a prune Danish. If I give it to her the regular straight-up way, she will ask for water, walk away with the glass and pretend to put the pill in her mouth when she really sticks it behind her wedding 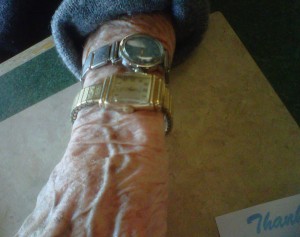 ring or her wristwatches. I guess she thinks everyone’s out to poison her.

Speaking of watches, she’s taken to wearing two or three of them clustered on her wrist, none of which work, but they actually look tres chic – if she were young and celebrity the look might even be trend-setting. Of course, her nihilist boyfriend Ron doesn’t care for it, but what can I say? He doesn’t care for much.

Sharp-minded paranoia makes inhabiting Dementiaville full of excitement, not unlike like that sixties British show The Prisoner. People are trying to keep you from escaping, to poison you, fool you, take your money, steal your car and wrest you from your comfort zone. You have to fight against these evil forces by cleverly disposing of the pills they give you, sneaking surreptitious looks at the strangers lurking around every corner, watching the watchers, following the followers and all while simultaneously fooling these care givers so that your audience realizes you, as the righteous thinker, the good force, the underdog, can outwit them and survive.

And then there is Ron. Forget about underdog theory — for him, the world is bleak because it is run by a ruthless murderer. “Every time I pass a graveyard I see the work of a serial killer,” he says as we three sit on the couch and absentmindedly channel flip through QVC, Fox and C-Span.  “Now look what He’s doing to her.”