My Psychic Connection with Jojo

Posted on June 7, 2015 by Janet Sassi
Jojo, my first dog, was diagnosed with epilepsy when he was almost 3 years old. We’d just moved from Illinois to New York for school, and his seizures started not long after our arrival. The vet said that they were possibly environmentally induced.
A dog with epilepsy faces a life on medication, in Jojo’s case phenobarbital. His seizures started infrequently, but became so commonplace and severe that he could barely get outside for walks. Often times my boyfriend and I would have to carry him up and down the stairs of our East Village apartment building to the sidewalk. There was no more running, jumping, or fetching in his future. In fact, the vet had suggested we put him down.
One day not long after starting an increased round of medication, Jojo went out an open kitchen window while we were out and fell three stories into the concrete courtyard. At roughly the same moment my dog was falling out a window, I was gripped by inexplicable distress and overwhelming sadness at my job, and left for home without saying anything to anyone. 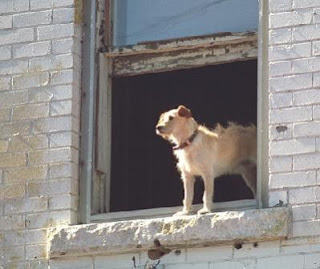 When I got to the apartment and Jojo wasn’t there, I asked my neighbor if she’d taken him out. No, but she’d heard a bark a half hour ago and thought little of it.
Looking down from the open window, I saw nothing in the courtyard. We searched the building. Nothing. We left to search outside.
From the building’s front sidewalk, I peered down the stairs leading to the passageway into the courtyard. Lying at the bottom of the first rung, my Jojo raised his head slightly to look at me.
I hurried down and took his head in my lap as my neighbor went to call the vet. A few minutes later, after three short, labored gasps, Jojo died in my arms.
I know, I know. Dogs don’t commit suicide.
But I have always wondered what possessed Jojo to go out that window. Had he seen a pigeon? Was he trying to leave the apartment? Did he see someone he knew in another window and try to reach him? Or did he simply slip, medicated and unsteady, trying to feel sunshine?
And while I am not one for psychic phenomena, something happened to me that day at work that I’ve never been able to explain.

It was as if my dog was calling me home.

This entry was posted in Uncategorized and tagged epilepsy, human-dog bond, psychic phenomena. Bookmark the permalink.

9 Responses to My Psychic Connection with Jojo