Annie, one of the more lucid residents, tells me that mom sleeps every night upright on the couch in the television lounge, holding a towel. After one whole year at the 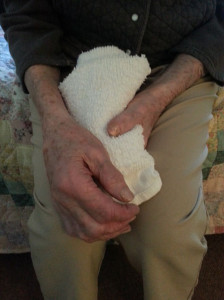 facility, she still will not sleep in her bed, let alone stretch out horizontally anywhere. A new prescription of Ambien CR last October helped for about a week. But, inevitably, she began again to rise from the room in the middle of the night and hobble down the hallway to the lounge, looking for others to be close to.

I know why she holds a towel (it is comforting) but puzzle why it is she will not lie horizontally. The night aides say that, yes, she does lie prone on the couch on some nights. But Annie says she doesn’t. That she sits there and falls asleep, head slumped forward so far, and for so long, that her upper spine has now shaped itself into a curvaceous hump.

And I believe Annie, because I can see the fatigue in mom’s face. She is worn out. Between the meds, the wandering around, the catnaps and the insane refusal to lie down, my mother is further narrowing her world to shore up her grip on reality. She will not break form. She needs to sit. She cannot allow herself the comfort of a horizontal rest because that implies peace, or surrender, of which there is none of for her. This irrational emotional state, this dementia, is depriving her of REM sleep, but sleeping obviously continues to mean something awful to her.

On Wednesday, I took her to her room and we sat on her bed. She nodded off (sitting up as usual) and I gently pushed her backward on the bed, telling her soothingly to lie down and put up her feet, to let her body relax. And she let me push her back, but she would only go 45 degrees down. She held her body there, at a 45-degree angle, pushing her head and her chest forward against my hands, eyes still closed, stranded somewhere in that painful sit-up position that athletes know as “the burn.”

Some call mom’s generation–those young men and women of World War II–“the greatest generation” because they didn’t give up. I see this in mom, even now. She is losing on many fronts, but she’s not surrendering.