Mom has begun falling down. There have been six falls si 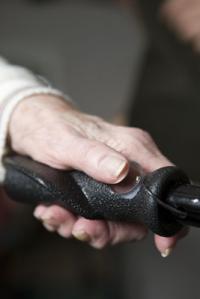 We bought her new shoes that we hoped would keep her steady-on-her-feet. But since we’re not there to see she puts them on, it’s hard to know whether her falls are a result of a balance disorder, her Risperidol, or her ragged pair of moccasins.

Mom needs a walker. Many others at the Facility use walkers. They offer some protection against one’s waning abilities and sudden missteps. They can become like seeing-eye dogs, something that helps you maneuver your way through a terrain that your senses can no longer read. The residents who use these walkers understand that,  without them, they’re liable to fall and get hurt.

But in dementiaville, one can’t understand that. In fact, were we to put a walker in front of Mom, she’d likely step around it. Were we to place her hands on it and urge her forward, she’d make it a few steps down the hallway with the contraption before abandoning it and shuffling off.

Anyone who has experienced the halting breath of watching their toddler racing down pavement at a speed beyond their ability understands why I cringe watching Mom walk down a hallway. Yes, she is 90. Yes, she is still ambulatory. No, she can no longer responsibly discern her limitations.

And yet she lives in a facility where she can walk unassisted wherever she wants, whenever she wants. She saunters into the atrium, hovers outside the kitchen, and slips in and out of people’s rooms to visit them. When she has been found on the floor after a fall, it is likely that nobody saw it happen.

I know that this isn’t safe, but I wrestle with what the alternative is. If she were to go into a nursing home, would they restrain her? Of course they would. And do I want her to live out the rest of her days not being free to rise from a bed, chair, or couch and do one of the last things she is able to do on her own?